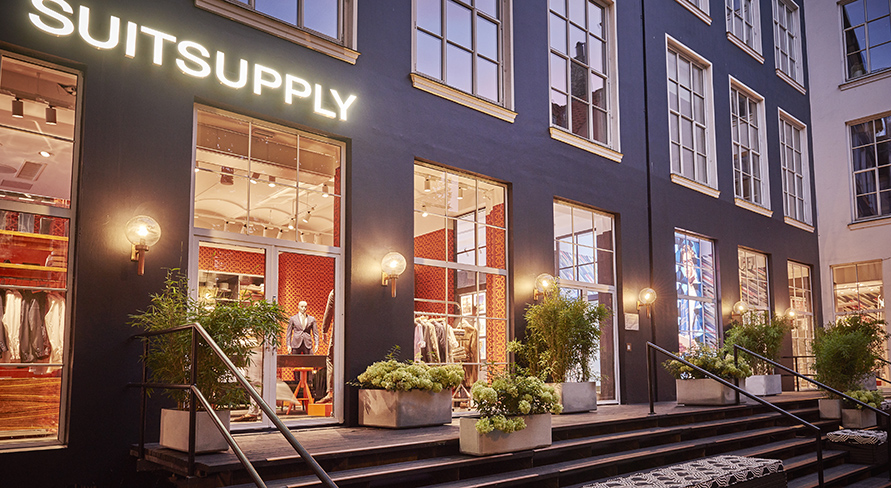 Summer 2016— This August, Suitsupply, the globe-spanning European brand, renowned for its focus on expertly crafted men’s tailoring, will make landfall in the nation of Denmark.

Suitsupply will open its 335 square meter store in the heart of Copenhagen, in one of the city's most high-profile shopping districts. This unique store design is an inventive blend of both culture and era. Outside, the building features many of the hallmarks of Danish architecture, including vaulted ceilings, arches, and sky-high windows, and even an adjoining traditional Danish courtyard. Inside, meanwhile, is an exercise in time travel, as warm colors and bright patterns evoke the retro energy of '80s fashion. And then there's the clothes, a perfect blend of contemporary and classic. The full Suitsupply collection will be on display; an extensive collection of suits, jackets, trousers, shoes, shirts, outerwear and accessories, including both made to measure and an on-site tailor to perform alterations as customers lounge.

Suitsupply began in Europe in 2000. In an industry where off-the-rack suits have invaded the closets of men around the world, Suitsupply introduces a better option: one where no attention to detail or quality is ever spared and tailoring is done on-site while you wait—allowing everyone to leave with the perfect fit.

They have received widespread accolade from the likes of GQ, Esquire, and, many others—and perhaps most notably, a Wall Street Journal blind test that rated a $600 Suitsupply suit in a first-place tie with a $3,600 Armani.

Suitsupply has grown to 69 international stores in cities such as Milan, London, Zurich, Amsterdam, New York, Toronto, Shanghai and Singapore, and, in addition to their retail outlets, holds a very strong ecommerce presence, allowing them to bring that same high-quality tailoring and personal service to customers around the world. And with its first location in Denmark, Suitsupply hopes to further expand its reach and coverage among the metropolitan centers of Europe.